La Crosse will be site of '21 TITLE Championship 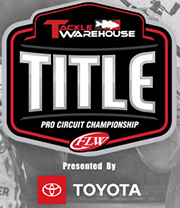 “We are elated to host the TITLE Pro Circuit Championship and showcase the incredible bass fishing that the Upper Mississippi River offers,” said A.J. Frels, executive director of Explore La Crosse. “The scenic La Crosse region presents a picturesque backdrop of bluffs that overlooks one of the best bass fisheries in the country. The catch-weigh-release format fits the Mississippi River perfectly as massive quantities of quality largemouth and smallmouth inhabit these bountiful waters, providing nonstop action and exciting competition for the live webcast and television broadcasts.”

“We couldn’t be more excited to take the Tackle Warehouse TITLE to La Crosse and the Mississippi River,” said Kathy Fennel, FLW executive VP and GM. “We’ve had tremendous success hosting tournaments in La Crosse in the past, so it made bringing our championship an obvious choice. The bass fishing fans in Wisconsin have always been extremely passionate and enthusiastic and we’re proud to be showcasing our most prestigious championship to them.”

The tournament field will consist of the Top 50 anglers from the 2021 Pro Circuit points standings.