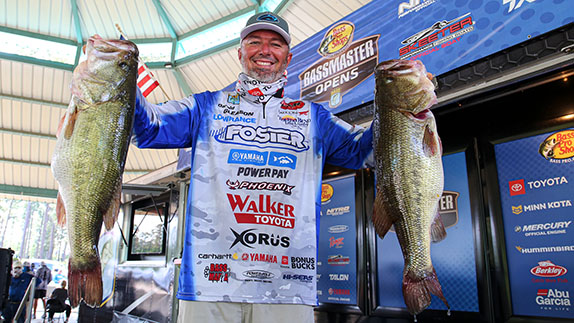 Darold Gleason of Many, La., executed a two-part game plan perfectly Friday to sack up 27-01 and take the day-2 lead at the Sam Rayburn Reservoir Bassmaster Central Open.

His two-day total of 44-04 gives him less than a 2-pound lead over Japanese angler Masayuki Matsushita, who is second with 42-15.

“I have a system and I’m just running it,” Gleason said. “I’m trying to catch what I can in the morning to get a limit. When I get a limit, no matter what it weighs, I’m locking a 3/4-ounce V&M football jig in the Gleason’s candy color in my hand.

“I’m putting a matching V&M J-Bug on the back and I’m running as many high-percentage structure spots as I can. I’m just running offshore structure spots that I’ve marked, mostly wood, roadbeds and things like that.”

Gleason’s fishing thoroughly, but he’s not spending more than about 15 minutes on each spot. The key to the pattern is a long-distance presentation.

“Because the lake is so pressured, I’m trying to make the longest cast possible without graphing the fish,” Gleason said. “I think that’s the key – not spooking them; sneaking up and catching them by surprise.

“I kept telling my co-angler, ‘I’m trying to catch them by surprise.’ I’m throwing that 3/4-ounce jig on 15-pound fluorocarbon line and when it hits, I feed as much line as I can. I want that jig as far away from my boat as I can get it.”

“That was all in a row. I made three stops and caught four fish that changed my day in about an hour. Both of my big fish bit on the second cast. I pulled up, boom-boom.”

To secure his early limit, Gleason targeted schools with a Carolina-rigged V&M Pork Shad and V&M Baby Swamp Hog, both in Gleason’s candy. He backed up the C-rig with a dropshot carrying a 4 1/2-inch V&M Straight Shooter worm in the morning dawn color.

Gleason summarized his Saturday game plan: “Obviously, tomorrow will be a championship day, so I think me and that jig are going to spend a lot of time together.”

Matsushita led day 1 with 27-10, but slipped to 2nd after adding 15-05 for a two-day total of 42-15. Returning to the same patterns he fished Thursday, Matsushita targeted offshore cover and breaklines and caught his fish on a jerkbait and a fluke-style bait.

“It was harder today; I think on some of my spots, the bass moved,” Matsushita said. “I fished (some of the same areas), but I got (fewer) bites.”

Matsushita again fished in 20 to 30 feet of water. On Thursday, he found his fish relating loosely to cover, but Friday, they seemed to be holding closer.

“Mostly, I’m fishing brush – with a swimbait, a big worm, a jig, a dropshot and a crankbait – because I couldn’t get anything else going in practice,” Douglas said. “I idled an area up by the bridge and marked 20 brush piles in 8 to 22 feet. I’m still figuring out which ones are good, and I’m adding different icons when I catch a fish on one.

“I was able to run a couple more spots, but I had a terrible day. I lost an 8-pounder and a 4-pounder that just killed me. But it makes me really hungry for tomorrow.”

Albert Collins of Nacogdoches, Texas, is in the lead for big-bass honors with his 9-12 largemouth.

Here are the totals for the 12 anglers who'll compete on the final day: