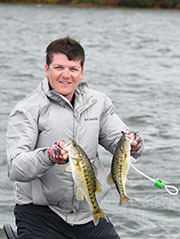 As the weigh-in for Day 2 of the Carhartt Bassmaster College Series at Lake Hartwell concluded and the standings were revealed, excitement and relief fell over Jacksonville State University senior Jarred Jones. For the first time in his college career, Jones made the Top 12 cut with a two-day total of 15 pounds, 13 ounces, landing him in 10th place for the day.

“It’s always been something I’ve wanted to do,” Jones said after the weigh-in. “I’ve been bass fishing my whole life and fishing at JSU for three years. I’ve qualified for two National Championships and never made a 12-cut. It’s just unbelievable.”

Jones fished the event solo after COVID-19 rescheduling conflicts kept his partner Logan Tate from making the trip — and he did it just two months after having open-heart surgery to remove a tumor that doctors determined to be B-Cell Lymphoma.

After healing from the surgery for seven weeks, doctors cleared Jones to participate in the tournament before starting chemotherapy in a couple of weeks.

“This has been the first time I’ve been out fishing since July, right before my surgery,” Jones said. “I was ready to see what I can do and ready to show people that no matter what happens, no matter what can put you down for a little bit, you can still do what you want to do.

“I was praying all morning, praying I could get through it and try to do my best or the best God had given me. It worked out, He was with me all day and He has been with me since then.”

With the added challenge of fishing by himself, Jarred’s father Mark Jones made the trip to ensure his son put as little strain on his body as possible.

“I’m his dad, I can read Jarred better than the general public,” Mark Jones said in an interview Friday evening. “I know he is struggling this week. He is pushing himself to the limits. But to see him today when he came in and gave me the thumbs-up and told me he has a decent bag and he’s going to make it; watching that weigh-in was nerve-wracking but exciting to watch his reaction when the scales were closed and the Top 12 was set.

“I know it isn’t as good as winning the Bassmaster Classic, but it was pretty good.”

Jarred Jones wrapped up the Lake Hartwell event in 11th place — a new career-high — and earned valuable points toward the School of the Year Standings.

Mark has been with Jarred every step of the way through his fishing career. A former Redman and Angler’s Choice Series veteran, Mark coached Jarred’s high school team in his hometown of Oxford, Ala., and has served as an unofficial coach for the Jacksonville State team. He has also watched his 21-year-old son endure so much.

“I had to call Hank at Bull Shoals and get them to pull him off the water, and he drove 11 hours to the hospital in Georgia because the doctors told us his mom was going to die,” Mark said.

Two months later, Michelle passed away — 13 months and 5 days after her diagnosis — leaving a hole in the Jones family.

“It took a lot from me and took a lot from our family,” Jarred said. “It did a number on her, but she stayed stronger through it. She didn’t let us get sad or nothing. She was always there for every one of us.

“She was a big supporter of my fishing, no matter where we went. If she couldn’t make it, she would call and check on us and make sure we had everything and ask how it was going. She didn’t know much about fishing, but she tried her best and made jokes when I had bad days and was there to hold me up and support me when I had great days.”

Less than a year after her passing, Jarred rushed to the emergency room with heart attack-like symptoms and doctors discovered a 9-centimeter mass on the pericardial sac region of his heart. After a month of biopsies and tests to determine the nature and severity of the tumor with no clear answers, Jones underwent a six-hour open-heart surgery on July 6, 2020 — 364 days after his mother passed.

Jarred spent four days alone in the hospital recovering from surgery while COVID-19 restrictions prevented any family or friends from entering the hospital. After the surgery, Mark received heartbreaking news from his son’s doctor.

“He had surgery on a Monday, and on Thursday the doctor called me to give me an update and said, ‘We’ve got pathology back; it’s cancer, and I’m on my way up to talk to him,’” Mark recalled. “I said, ‘Please don’t tell him by himself.’ The doctor was able to get me in there when they talked to Jarred.

“The remarkable thing about it was, you have a doctor delivering that kind of news, and a dad that’s a wreck, and Jarred took it like a champ. He was like, ‘When do we get started? What’s the next step?’ It’s been amazing to watch him. It’s kind of been a learning experience for me. He has handled it better than I have.

“But some of the first words he told me and the doctor after the diagnosis was, ‘I’m going to fish that tournament,’” Mark continued. “All these anglers in the College Series are fishing for their dream to make it to the next level, to fish the Opens and the Elites and make it to the Bassmaster Classic. And (then) to see life is fragile. One day you are here, and the next day you could be gone. Twenty-one and a cancer diagnosis is tough. It puts life in perspective.”

After finishing 22nd at Toledo Bend and 15th at Smith Lake to open the 2020 Bassmaster College Series, Jones and Tate were fifth in the Bassmaster School of the Year standings. Jones’s goal was to be ready to fish in time to make the trip to Lake Hartwell and continue pursuing a School of the Year title.

“I went fishing one time before this tournament, and it took a lot out of me,” he said. “I was shooting for three weeks after my surgery to get back up and try to cast out in the yard and do what I can to see my limits and see what I needed to work at. The first few weeks were rough, but it has gotten a lot better.”

While he was regaining strength and working towards a tournament appearance, the community of Oxford rallied around Jones and his family, raising money for Mark and Jarred for time missed at work as well as funds for Jarred to fish once he was healthy.

“The support I’ve received from my hometown and my family, my girlfriend being there for me all the way and my family being there, the whole Oxford community has helped me financially and helped me raise money so I can fish these next couple tournaments,” Jones said. “Two little girls set up a lemonade stand and raised money for me that way. They wanted to support the cause, and everyone has been outstanding at home.”

Jones’s Jacksonville State University teammates have also been an important part of the support system for the Jones family.

“My teammates have been there every step of the way,” he said. “They’ve texted and called me. They’ve come to the house and brought food over for our family. It’s been outstanding how amazing they have been to me and my family.”

With the Top 25 finish at Toledo Bend in January, Jones and Tate earned their spot in the 2020 National Championship at the Harris Chain of Lakes at the end of October, an event Jones has qualified for twice before but has only been able to fish once.

While the surgery wounds will have healed by that time, chemotherapy treatments will be underway before the tournament begins to ensure the cancer doesn’t spread further. Even though he won’t be 100%, Jones said he does not intend to miss the biggest tournament of his life.

“I’ve been on my phone waiting for them to announce where it will be,” Jones said. “I know I have to go through chemo and I don’t know where my strength will be and how hard it will hit me, but I’m going to make arrangements to where I will be down there.