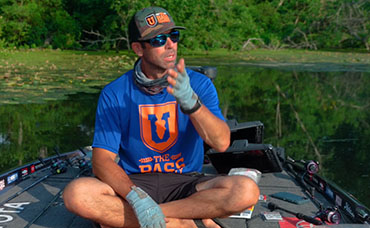 While the Ned Rig may be best known because it is easy for beginners to pick up, even a seasoned pro like Mike Iaconelli has found ways to integrate it into his tournament repertoire. “That thing catches more fish than you can believe,” he said of the do-nothing soft plastic. There’s just one problem: “It’s not weedless at all. It’s not snagless.”

So how do you integrate the fish-catching sensibilities of the Ned Rig into more cover-laden environments? Iaconelli learned from friends like Rapala’s Dan Quinn about the Tiny Child Rig, so named because “anybody could use it. Even a tiny child could rig and use this bait because there’s nothing to it.”

Unlike a Ned Rig, the Tiny Child does not use a jighead, but rather a hook and weight combination. Ike prefers the VMC Finesse Neko Hook, which he described as a cross between a straight-shank and an offset worm hook, along with a finesse barb that keeps his soft plastics in place. He typically utilizes size 1 or 2.

He pairs that hook with smaller, stubby soft baits. “The key to it is no action,” he explained. His two favorites are a soft stickbait and a straight-tailed worm, like the Berkley Power Bait General and Flute Worm, respectively. He’ll start with small sizes, but then often bites off a half-inch up to an inch and a half from the lure. “I’m trying to take it a little further and I’m going to make it a little shorter.” Then he rigs it traditional Texas style with the hook in the thin end of the worm.

The final component is the weight, and he typically prefers the VMC Neko Weight, although he occasionally uses the Half Moon Wacky as well. He inserts it completely in the blunt end of his lure, taking care to make sure that it goes in perfectly straight all the way.

While the Ned Rig sits nose down, tail up, the Tiny Child, with a rear weight, sits tail down, nose up. That means it gets snagged less, often provides an easier target for bass and facilitates a good hook set.

He most often fishes it on an Abu Garcia Ike Series 7’2” medium spinning rod, although he said that the same rod you use for Ned-Rigging will suffice – you don’t want anything too light or too stiff. He’ll pair it with a fast reel, at least 6:1, and varies between two line choices. The first is 8- to 20-pound braid with a 6- to 10- pound fluorocarbon leader. He likes bright-colored braid, often white or hi-vis yellow. “You have to be a line-watcher in this technique.” When he’s fishing heavy current and wants to facilitate a purer drift, he’ll go with straight fluoro, again in 6- to 10-pound.

If you want to learn some of the other secrets of how Iaconelli uses the Tiny Child Rig, including where it works best and why he wants it to fall on a semi-slack line, check out his full on-the-water video, available only by subscribing to The Bass University TV.