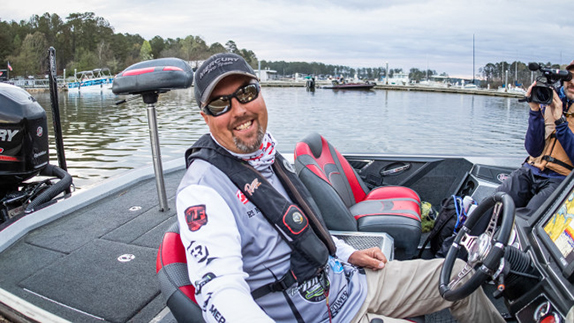 Ron Nelson will go into next week's FLW Pro Circuit regular-season finale at Lake Erie out of Sandusky, Ohio with a commanding 73-point lead in the Angler of the Year race. A finish equal to any that he's posted on the tour over the last two years except his initial rookie outing, when he was 120th at Sam Rayburn Reservoir in January 2019, will lock up the points championship.

Although he resides in that region, he's never fished anywhere on Erie or the Detroit River. He's been to Lake St. Clair only once and that was two decades ago. He's not overly concerned about his inexperience on the venue, however.

"The 4 days of practice they're giving us will help a lot," he said. "I got some info before the cutoff that will give me a starting point and that's nice to have, but I've still got to go out there and do my own thing.

"My No. 1 goal will be the same as it always is – to make the Top 50 cut. The only way I'll be conservative is that instead of fishing until the last minute, I'll come in earlier if I've got a solid bag. Otherwise I'm not going to lay up, per se. I didn't get where I'm at by doing that."

The 2019 Rookie of the Year will room at the event with Detroit River ace Scott Dobson. If both decide to make long journeys in the same direction, they'll do it in tandem.

"Those runs are high risk if you're by yourself, but a lot less risky if you've got people you're traveling with," he said.

He got his revenge on Sam Rayburn this year, opening the campaign with a 5th-place showing. His other finishes were 11th at the Harris Chain, 2nd at Lake Martin, 41st at Lake Chickamauga and 12th at the Mississippi River.

Those last two were Super Tournaments (as Erie will be) in which the Pro Circuit field has been joined by more than 50 anglers from the Bass Pro Tour.

"Those have been a lot of fun," he said. "I've been treating them the same as regular tournaments, with the only difference being that the launch and the lake might be a little more crowded.

"I've been approaching them the same way – just trying to make those cuts."