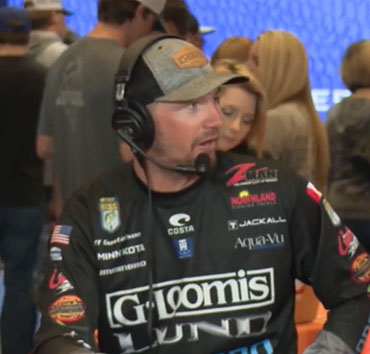 Chris Johnston may have recently become the first Canadian pro to win a Bassmaster Elite Series tournament, but Jeff Gustafson was the first one to grace the Bass University platform, and with it he brought some serious smallmouth intel. For years, his best lure for catching 4- and 5-pound smallmouths has been a hair jig, but not the big “preacher” style version used on the TVA lakes.

“We’re talking tiny marabou jigs,” he said. “Black, generally. We’ve been using them for smallmouths up north. Any time you have clear water and the fish are 12 to 14 feet or less. They’re up shallow and milling around, that’s when these things shine.”

When it’s hot and sunny and the bass don’t want to eat, they’ll often suspend next to a large clump of grass or a large boulder, and they simply can’t resist this snack-sized, undulating offering when it swims on by.

It also excels in places where a tube jig or other bottom-bouncing lure would not, like areas with slime-coated bottoms, because “you don’t let it touch the bottom.” You reel it back and let it do its thing.

He’s not terribly picky about colors. While he’s experimented with several, straight black is tried and true. He is, however, picky about the jigs he uses, and he ties his own (which he gives out to some friends and a few other tour pros). He likes a No. 1 Gamakatsu hook on a ball-head or mushroom-head jig.

“A lot of the ones that you buy, the hook is too big,” he explained. “The jig doesn’t have that sexy swimming action.” He also uses just the fluffy part of the marabou feathers. “I don’t put any of the spines in.”

A 3/32-ounce version is his “most universal size” but he’ll go down to 1/16 or up to 1/8 as conditions warrant. He also ties a keeper onto the shank of a hook and imbeds a 1/2- or 3/4-inch piece of soft plastic onto it, which not only keeps it fluffy, but also allows him to cast significantly farther.

His favorite rod for the technique is either a G.Loomis 901 or 902. The 7’6” length enables him to make long casts, and the soft action allows the smallmouths to inhale the lure. They’re the same rods he uses for spybaits. He’ll fill his spool with 8-pound Power Pro braid and affix a leader of 8-pound fluorocarbon. “I never use anything less than 8,” he explained, adding that he’s never been convinced that dropping down any lighter results in more strikes, only more heartache, especially around zebra mussels.

If you want to learn some of the other secrets of Gussy’s marabou jig mastery, including why it’s not his first choice for clear-water largemouths or even spotted bass, check out his full on-the-water video, filmed at this year’s Bassmaster Classic, available only by subscribing to The Bass University TV.