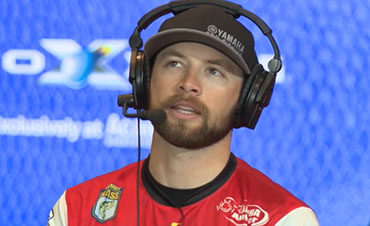 If you watched the recent ESPN Series “The Last Dance,” then you know that the “Triangle Offense” was a big part of the Chicago Bulls’ success in the 1990s, but you might not know that a theory called the “Percentage Triangle” has played a critical role in Brandon Palaniuk’s on-the-water excellence. The Idaho pro, a nine-time Bassmaster Classic qualifier and the 2017 Elite Series Angler of the Year, has utilized the strategy for breaking down lakes throughout his career.

Use of this theory enables him to pull out an old-school paper map and reduce the playing field substantially. Before he won at the St. Lawrence River in 2013 he’d never been to that particular body of water, but the strategy allowed him to cover massive amounts of territory with uber-efficiency. “When you find where the fish are at, I don’t mess around fishing the rest of the triangle.” Indeed, he can run around to other triangles and focus on that same section. He said that while he almost always depends on the Percentage Triangle, it’s slightly more or slightly less efficient from lake to lake.

“Florida is the hardest place to apply this theory to,” he said, which perhaps explains why the Sunshine State has not been as kind to him as some other locales. “Grand Lake is one of the best for it ... the 2013 Classic, I could look at a map and tell you where I was going to catch a bass.” It eliminates some of the home lake advantage and also keys him in when an out-of-the-norm technique may prevail. Indeed, that’s why lots of Palaniuk’s success has come using strategies that defied conventional wisdom – like cranking offshore in the spring at Bull Shoals while much of the rest of the field was beating the banks.

The Percentage Triangle also gives him the confidence and the ability to alter his game plan quickly and effectively when changing conditions would otherwise throw many of us for a loop. “The only constant we have in fishing is change,” he said. “It’s not all black and white all the time.” Reliance on this baseline, and what it tells him about fish movements, provides him with the confidence to pivot from his practice findings when the conditions warrant such a move.

If you want more information about how Palaniuk uses the Percentage Triangle to locate winning groups of fish, including his thoughts on the Sabine River, check out his full video filmed at this year’s Bassmaster Classic, available only by subscribing to The Bass University TV.