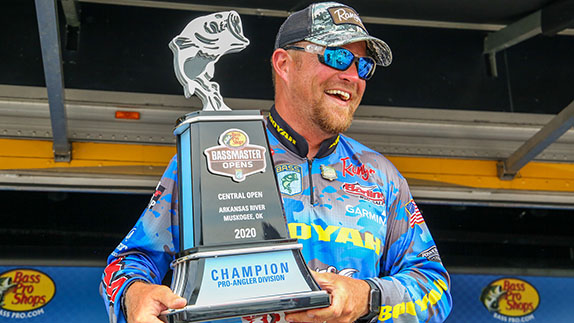 Chris Jones knew he had his work cut out for him, but he stuck to what he knows best and overcame a significant deficit to win the Arkansas River Bassmaster Central Open with a three-day total of 42-13.

Starting the final round in 8th place, Jones’ biggest decision was whether to stay local or make the long run downriver to the Kerr Lake Pool. The latter option requires locking, which greatly diminishes a competitor’s fishing time, but this fertile reservoir’s renowned fish population often justifies the sacrifice.

After drawing the last flight on day 1, the Bokoshe, Okla. resident fished Kerr and placed 17th with 12-10. The next day’s reversed checkout order gave him a shorter day, so he stayed in local waters and secured a final-round spot after adding 11-03.

Day 3 allowed him a longer fishing day, so he returned to Kerr and locked up the win by adding a 19-pound limit — the tournament’s second-largest behind Keith Poche’s 19-05 on day 2.

“I knew the wind was going to blow today, I knew a front was coming and I knew there was a chance to catch a giant bag [in Kerr] and I just wanted that chance,” said Jones, who earned $45,300. “I knew I was 4 pounds behind [day-2 leader] Dale Hightower, so I knew I had to go.

“I really should have [weighed in] 24 to 25 pounds. I weighed two little fish today, but I broke my rod on a big one and lost her and had another one tied up in some grass that came off. But it was just one of those magical days. Things have to go right for you to win and it happened today.”

Although he weighed a couple of fish on a YUM Bad Mamma that he Texas-rigged on a 4/0 Owner Beast hook with a 1/4-ounce weight, Jones did most of his work with a prototype Booyah swim jig set for release in July. Targeting water willow, he fished the 3/8-ounce black/blue bait with a 3.25-inch YUM Craw Chunk trailer in black neon.

“I did what I’ve always learned to do on this river – swim a jig, swim it some more and whenever they aren’t biting, you swim it some more,” Jones said. “I had my trolling motor on 70 or 80 and we just went.”

“I’ve been waiting on this cloud cover to get here for two days and it finally showed up,” Jones said.

John Garrett of Union City, Tenn., finished second with 42-07. Garrett finished 6 ounces short of the win after self-reporting a rules violation. After catching his sixth fish, he continued fishing without culling. Tournament rules stipulate that an angler cannot continue fishing with more than five fish in the livewell.

The miscue resulted in a 2-pound penalty.

“I made a mistake, but I could not have asked for a better day,” Garrett said of his strongest performance this week. “Today, I was either going to go to Kerr and swim a jig in grass or stay [local] and try to catch release fish. I fished for about an hour and a half and hit a magic stretch where all those fish had pulled up.

“All my fish this week came on a Texas-rigged Strike King Rage Bug with a 3/8- or a 1/2-ounce Strike King Tour Grade tungsten weight. Out here in the clear water, I was throwing green-pumpkin and in Spaniard Creek, I was throwing black/blue. I got good bites and got a lot of bites.”

Hightower added 13-12 to his previous weights of 13-01 and 15-00 and finished with 41-13. Foregoing the run to Kerr in favor of maximum fishing time, the Bassmaster Elite Series pro from Mannford, Okla., fished about half a mile from takeoff and meticulously worked shallow wood cover with a 7-inch YUM blue fleck worm with a 1/4-ounce Wicked Weights sinker and a Sixgill straight-shank hook.

“I just fished back and forth, up and down stretches, throwing at laydowns,” Hightower said. “I had a little flurry on the spot I fished yesterday, but they just seemed to all be the same size — little cookie-cutters. But I moved around a little bit and picked up a couple of good fish later in the day after I moved across the river.”

Here are the final totals for the top 12: