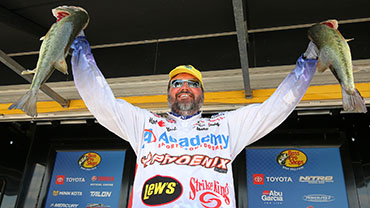 Greg Hackney knows that June isn’t exactly a generous month on the Arkansas River, but locating a key spot in practice put him in position to catch a five-bass limit that weighed 18-01 for the day-1 lead of the first Bassmaster Central Open of 2020.

“I pretty much stayed on it all day long and caught everything that bit. I thought the potential was there to catch 20 pounds one day. I didn’t expect it to hold up for multiple days.”

Considering that he had about 30 competitors within sight and most were fishing techniques other than his, Hackney opted to hold his cards low. He did mention that he’s fishing a 20-yard stretch of hard bottom within a larger area.

“It’s a shallow spot that has a lot of deep water around it and lots of bait,” Hackney said. “Today, the key to this spot was [that] there was a lot of shad and they were big. I caught one big one there in practice.

“This morning, I said ‘I’ll stop and hit it and I have time to fish it, and if I decide I want to lock, I’ll have time to do both.’ I caught a big striper, then a 4-pounder pretty quick and then, by the time I needed to lock, I had three, so I spent the rest of the day grinding it.”

With his weight in the livewell by about 12:30 p.m., Hackney said he feels confident he caught most of what the spot had to offer, at least for the day. He caught his fish on moving baits and pitching baits.

Dakota Ebare is in 2nd place with 15-12. Locking down to the Kerr pool proved stressful for him – even after a slow start.

“I was nervous about [the locking decision] all day,” Ebare said. “Even though I was due in at 3:40, I had it in my mind that I had to catch ‘em quick just to prove to myself that I can do it tomorrow, when I’ll have a short day.

“It took a lot of perseverance to keep the train on the tracks because that pressure got to me. I only had two fish, and while I was running to one of my best spots, I was praying for peace of mind. I pulled up to my next spot and caught my biggest one of the day – about 4 1/2 pounds.”

Noting that he missed two big-fish opportunities, Ebare said he was targeting a particular type of structure where current was key. He caught his bass on a mix of moving baits and slower presentations.

“During practice, they had been biting better in the morning and then you’d get a lull in the middle of the day, but I was very fortunate to get the quality bites I did today between 10:30 and 12,” Ebare said. “I sat at the lock for 2 1/2 hours. I should have been fishing, but I was so nervous about getting into the lock as soon as it opened.”

Daisuke Aoki of Japan is in 3rd place with 15-03. Aoki devoted his fishing hours to the Neosho River, where he targeted rock and wood with a ChatterBait and a Texas-rigged beaver-style bait. Aoki said he caught fish all day, but his morning produced most of his weight.

Tony Dumitras took big-bass honors for the day with a 5-10 largemouth.

Here are the totals for the initial top 10: