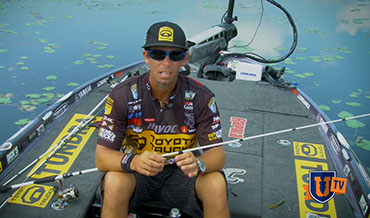 Bass University co-founder Mike Iaconelli isn’t afraid to use finesse gear even in traditional power-fishing environments. He knows that when the bite gets tough, turning to spinning gear, light line and small baits can trigger bites that others don’t get. That’s not necessarily a secret among seasoned anglers, but where Ike differentiates himself is with his focus on his baits’ movement.

One mode of movement that he frequently tries to emulate is the backward scurrying of a scared crawfish, or the slow downward gliding of a dying shad or panfish. For this, he picks a small straight bait like a French Fry and impales it on a 2/0 or 3/0 offset VMC hook Texas-rigged with the flat side down. He creates the backward motion by inserting a simple nail weight in the tail, and he carries three or four sizes of nails to account for varying currents and depths.

“When we cast this bait, that simple nail is going to cause this bait to glide backwards,” he explained. That enables it to get under cover including docks, overhanging trees and vegetation. He’s careful to always fish it on a semi-slack line. “It allows this bait to drift backwards.” If your line is too taut, it’ll inhibit the action, and if it’s too slack you won’t be able to tell what the lure is doing. If you don’t get a bite on the initial fall, lift your rod from 3 o’clock to 12 and follow the slack back down. “I’m going to do that all the way back to the boat.”

“It’s absolutely key to use fluorocarbon for this technique,” he added. Of course the line is clear and abrasion-resistant, but the main reason is that it’s dense and sinks, which helps the bait glide back naturally.

Another finesse lure with a distinctive fall is a tube jig, which spirals down, attracting fish, especially around sparse cover and in open water. “We’re going to pick a jighead that maximizes the spiral action of this bait,” Ike said, noting that as baitfish die they spin and fall. He wants a jig-head with a 90-degree line tie, and he controls the amount of spiral by adjusting where he pops out that tie point. For a tight spiral, which is desirable in cold water or when fish are otherwise inactive, he’ll jam it in “as far up as we can.” When the fish are a little bit more active, or the water is slightly more stained, he’ll push it back a little bit toward the tentacles, which results in a wide spiral. In super-hot, summertime conditions, or when fish are extremely active, he’ll push it back almost halfway into the tube, leaving a lot of room up front, which causes the lure to make extremely wide circles on its descent.

If you want to get more information about how Iaconelli assesses and utilizes distinct movements in finesse baits, including his use of “no motion” or “I-Motion” lures, check out his full video filmed on the water, available only by subscribing to The Bass University TV.