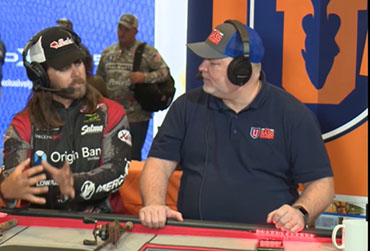 While most of the FLW Pro Circuit field went to the bank or threw a rattlebait during this year’s Harris Chain event, Louisiana pro Hunter Freeman spent most of his time facing the other way with a Carolina rig and finished 3rd. He clarified that he wasn’t necessarily deep – fishing about 5 feet most of the time – but his preference whenever possible is to be offshore.

It can be a hero-or-zero approach because “they have more places to go,” but when it works you often have a population of fish all to yourself. Success is a residue of hard work idling and looking at a graph, and requires heavy concentration. “Some of the best places I’ve ever found are the size of this boat,” he explained. Modern electronics have made the process much more palatable, and he said that the addition of spot lock has been “life-changing.”

When he goes offshore, he has four main tools – a Carolina rig, a football jig, a big Texas rigged worm and a crankbait. While he loves to crank, he bucks conventional wisdom by starting on the finesse end of the spectrum and gradually gets more aggressive. That’s especially true on lakes he’s less familiar with, and doesn’t necessarily apply when he’s hunting a kicker, but more often than not he’ll start with a simple Carolina Rig, consisting of a 2- to 3-foot leader, a 3/4-ounce Swagger Tungsten weight, one bead and a swivel. He’ll most often employ a 17-pound main line and a 15-pound leader, but amongst heavy cover he may go up to 17 and 17, or even 20-pound as a main line. One of his favorite choices is a Zee Bait Ribtail worm, which floats.

“To me, a Carolina Rig is an igniter,” he said. “Get one to bite and it gets them going.” If it doesn’t work after a handful of casts, he’ll try something else.

Around brush, he prefers an Xcite MaXimus worm, most often rigged with a 3/8-ounce weight. Despite its 10 1/2-inch length, he prefers a 4/0 hook. Others may use 5/0, 6/0 or even 7/0, but he believes that those larger sizes detract from the worm’s overall action. Typically he’ll let it sit still and waggle in the current until it makes a big bass mad enough to bite.

The football jig is a big-fish bait and he usually favors a 3/4-ounce Bryant’s Custom Jig, often in PB&J. It allows him to cover water and he’s particularly fond of it in the pre-spawn.

No matter the depth, he never forgets that fish offshore are there primarily to feed.

“Fish get offshore because of bait,” he said. “They’re not out there just because it’s cool.”

If you want to get more insight into Freeman’s offshore strategies, including why he owns a total of four swing-head jigs (only one of them not rusted out), check out his full video filmed at the Bassmaster Classic in Alabama, available only by subscribing to The Bass University TV.