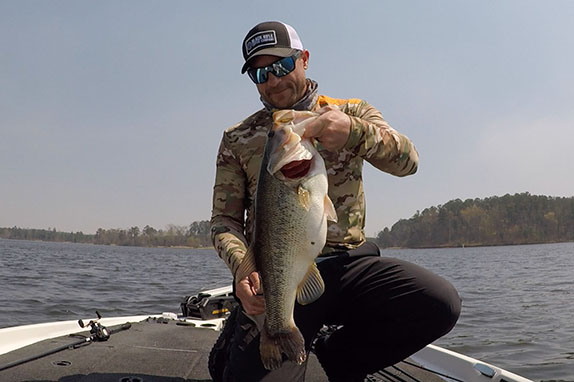 Lew's announced today that Jamey Caldwell, a North Carolina angler who served for 21 years in Special Ops with the U.S. Army, has signed on to represent the company's American Hero Series lineup of rods, reels and combos. A portion of the proceeds from the sale of American Hero gear is used to help veterans and first responders enjoy the sport of fishing.

“After numerous combat deployments, I found myself needing an escape,” he said. “Fishing allowed me to relax and reset my mind, which has continued to this day.

“I’ve always admired the Lew’s brand for their quality of product and their pledge to support our military and first responders. Being part of Team Lew’s and the American Hero program means a lot to me. With the donation of fishing equipment and proceeds from the sales of the American Hero line, this program provides that same opportunity to veterans; I am proud to be representing the brand and this program.”

Added Lew's/Strike King director of pro staff and media relations Mark Copley: “Though he would never say this himself, Jamey is the epitome of an American Hero. He is also a tremendous angler and representative of a brand – he is the perfect choice to represent Lew’s and the American Hero Series. We are proud and grateful that he has chosen to fly these banners with us.”