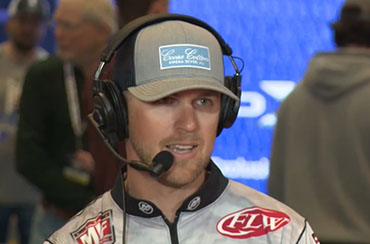 FLW Pro Circuit angler pro Ryan Salzman is also a full-time guide on the Tennessee River chain of impoundments, and while he loves the big largemouths that inhabit those lakes, he’s also mastered the local smallmouths. He particularly enjoys fishing for them with hollow-belly swimbaits below the system’s many dams.

There’s a window early each year when it is particularly deadly, and he’ll go through streaks of giants, including a personal best 8-pounder. “It is not uncommon to catch a 6-pounder every day,” he said. A few years ago he won a BFL on Wheeler with 25-12, all smallmouths, and another time a friend had almost 30. These tailrace fisheries exist on all of the TVA lakes, he added, but the key depth zone may vary.

He designed the lures for True Bass Swimbaits, and often starts with a 4 1/2-inch version, which he compared to Doritos. “The most common snack for a bass is like a 4- or 5-inch threadfin,” he explained. He’ll rig it on a 1/2-ounce head perhaps 85 percent of the time, while in shallow water he’ll go down to a 1/4-ounce. Hook length is key. You want it to emerge from the plastic “close to front of dead center mass.” Too long and it kills the action. Too short and you’ll have hook-up issues.

When he goes to rig the bait, he takes his needle-nose pliers and opens the spring just a hair to give it a bigger bite. Then, with a series of three “pull and twists” he’ll rig it straight and snugged against the head. He usually gets his clients using the best-performing size and then goes up from there, and has found that a smallmouth will eat swimbaits as large as 7 1/2 inches.

In order to get in the zone, he gets the boat up into the current, then slows it to “terminal velocity,” where it’s drifting at the same speed as the water. Then he makes a cast directly at the bank. “You do not want to throw it straight up into the current while you’re drifting,” he said, noting that pushes the bait to the bottom. “You want positive control over your bait.” That means keeping it up over the rocks. You can tick them occasionally, and you will lose swimbaits intermittently, but he reminded his audience that smallmouths feed looking up most of the time. The bite is usually a sharp “thunk.” If and when you do get hung up, push the button so as not to dig the lure in deeper. Sometimes you can work your way back up to the lure and free it from overhead.

While many anglers associate smallmouths with light tackle, Salzman uses a 7’3” to 7‘6” baitcasting rod and 20-pound fluorocarbon. “We’re throwing heavy line because we’re throwing it in 8 to 10 feet of big rocks,” he explained.

If you want to get more insight into Salzman’s smallmouth swimbait secrets, including why colors like “99 Problems” and “Citron” are so deadly and why years with low winter rainfall are best, check out his full video filmed at the Bassmaster Classic in Alabama, available only by subscribing to The Bass University TV.