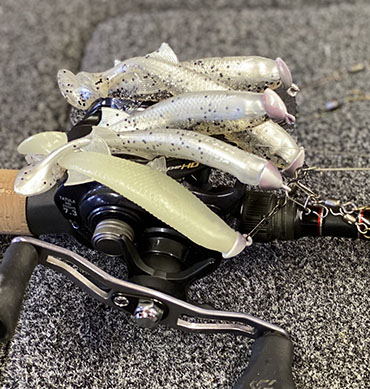 Many years ago I fished with a friend of mine and put the hurt on him on with a crankbait in mid-winter. Fish where stacked in one creek and I was catching a fish every other cast, and out of the back of the boat, so it wasn’t a first-cast deal. Our crankbaits where the same.

So he began this line of questioning: "Hey, what gear ratio you throwing? What line are you using? Are you stopping it? All good questions, which I very sporadically answered – haha.

Those things today are just as important every day you go fishing and every day you will fish the rest of your life. Fishing is all about cadence and depth control, given that you are around the fish. If you are not around fish, the best lure in the world will not help you.

Once you find them, figuring out this cadence and depth control quickly can mean the difference between a few small ones for the day and a huge catch of lots of big ones. Of course, like everything else in fishing, this too changes and it can change often during the day.

Think about a current pattern … the shad spawn which is happing now across much of the county. The early morning fishing routine is cover as much water as you can on banks with shad and fish fast baits like spinnerbaits, squarebills and quick-moving topwaters and swimbaits. This often lasts until 9 or 10 a.m. if you are really lucky, then it stops. You can fish 5 more hours with the same lures and speed and literally catch nothing after catching a ton of fish early.

Time on the water year after year and good information like what's found on BassFan can teach you these things faster than I learned them many years ago. So after that magic shad spawn ends, it is up to your cadence to keep you catching bass. It is hard to change gears, especially for me because I love going fast. I often force it fast, even though I know better. More on all that in a future article with a show to match

This week's show is an exceptional display of the effectiveness of the A-rig. This was my second show this season with the rig. The more I fish it, the more I learn. just like with all techniques.

With an Alabama rig you are fishing for suspended fish more often than not, and there is no better lure for that situation. I was fishing for fish suspended on bridge pilings. I did a really good job explaining during the show, but I’ll explain again for those BassFans who didn’t get to see it.

I was fishing in the middle of winter, but the water temp was a fairly warm 52. The shad must have just finished their shallow, back-of-the -reeks deal and the cooler water pushed them to the channels. The main intersections of the channels, current and cover were all happening at the bridges on the particular lake I was fishing. The last time I visited the lake was 3 years prior during the spring, so I had no idea what I’d be doing for the day beforehand.

Right away a chunky 3-pounder bit on a piling just a few feet down. Ding ... lightbulb went off and I was on a deal right off the bat. It took about 3-4 hours for the fish and my cadence and depth to all agree with each other. Once it got right, fishing was great.

The key was nothing groundbreaking but took a little getting used to. A fairly slow retrieve, bumping the piling, then giving the whole rig a slight twitch about 3 feet away from the piling to encourage those interested to bite. Just like any lure, bumping the cover seems to be a key for the rig, at least on this day. I’m sure there will be days when they want it away from the piling and will want to rush out and grab it, but this day they were inactive and needed some encouragement to bite. Singing and talking to them wasn’t a factor.

I was fishing an A-rig with five 4-inch Culprit Riptide Mullets on 1/8-ounce heads on a 7’6’’ Falcon Expert Swimbait Rod. It got tossed out on 25-pound Yo-Zuri Hybrid. This combination is perfect as the line compliments the rod – very strong, yet very forgiving. The whole system works well.

The Riptide Mullets where designed for saltwater, so they are tough, yet easy to rig. I often catch 15-20 fish before a re-rig is necessary.

No matter the time of the year, always remember that cadence and depth control is always the key. Like my buddy learned that day years ago: "Hey what, gear ratio you throwing? What line are you using? Are you stopping it?"