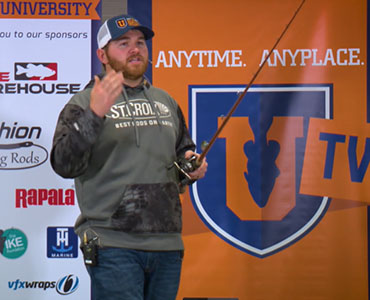 Alabama's Jesse Wiggins dropped onto the pro angling scene a few years back with a flourish, triple-qualifying for the Bassmaster Classic out of the gate. He continues to cash checks consistently and a big part of his success is attributable to his prowess with shallow-diving crankbaits.

The heart of his system lies in his tackle choices. They enable him to make pinpoint casts, hook short-striking fish and keep them buttoned, and it all starts with his St. Croix cranking stick. “The rod is your main deal when you start throwing a crankbait,” he explained. He utilizes a 6’10” medium-heavy Legend Glass, which has the right parabolic action for treble hooks, meaning that it won’t rip them out of the mouth on a hard hookset or surging pull. At the same time, it’s super-sensitive. “You can feel when your bait gets fouled up,” he explained, noting that prevents him from wasting casts.

While Wiggins, like most anglers, previously used 7-foot-plus cranking rods, he said that the shorter length is better suited to making highly accurate casts. It’s also light, which is critical because “when you’re cranking you’re making tons of casts.”

He pairs it with a 6.4:1 baitcasting reel. “You can speed it up and you can slow it down,” he said, meaning that it’s good through all seasons and under all conditions. “Use a big reel so you keep you gear ratio the same.” The reel is spooled with 12- to 20-pound Seaguar AbrazX fluorocarbon. “Ninety percent of the time I throw 12,” he explained. Going heavier prevents the lure from diving to its maximum depth and inhibits its action. Nevertheless, when grinding a lure across cover like riprap, he’ll go higher.

Wiggins incorporates a variety of styles and models of shallow-diving crankbaits into his arsenal, but he’s loathe to invest in the super-expensive versions. “I don’t want to spend a hundred dollars and buy three crankbaits,” he said. Indeed, one of his absolute favorites is the Strike King KVD 1.5 square-bill, available for less than $6 from Tackle Warehouse. “It’s just a fish-catcher. There’s no way around it.” Some of his other favorites include the Luhr-Jensen Speed Trap, especially when it’s cold, the no-longer-made Zoom WEC wooden lures, a variety of Jackall plugs, and even a 1.0-sized square-bill when conditions are tough or forage is small. In dingier water he’ll typically start with crawfish colors or the traditional chartreuse with a black back, but in clearer water he employs more natural baitfish shades including sexy shad.

No matter which lure he’s cranking, he will spend money for premium treble hooks, and he changes them often, utilizing either Mustad Triple Grips or Owner ST36 trebles.

He has key seasonal patterns that determine which crankbait he uses and where and how he’ll use them. Sometimes those systems overlap – such as during the prespawn and the fall, where conditions may replicate themselves.

If you want to get a better grip on Wiggins' Southern cranking system, including how he tracks shallow bass from month to month, check out his video, available only by subscribing to The Bass University TV.