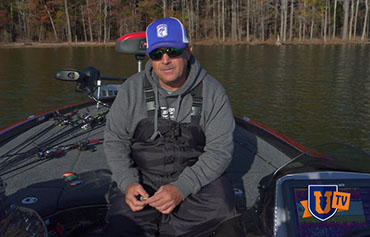 Elite Series pro Rob Digh comes from Denver, N.C., smack dab in the heart of cranking country. Whether you’re throwing a big deep diver, a finesse flat side or a round-bodied square bill, the boys in Carolina always have a few tricks up their sleeve when it comes to diving plugs.

Digh is particularly fond of those lures that run 2 to 8 feet deep, and they’ve been a valuable tool during a B.A.S.S. career that has seen him in the check line over half the time.

“Typically, I’ll look for the dirtiest water on the lake,” he said of his shallow cranking efforts. That often means the backs of creeks. “Typically, your water is going to get clearer as you move out to the mouths of the creeks.” Any time he starts marking bait, that’s where he wants to focus, and a bit of wind can often produce the same impact as murky water. Once he identifies prime targets, he’ll change angles repeatedly, long after most other pros might’ve given up. “Maybe that fish is in there and he just couldn’t get to your bait,” he explained.

He keeps his color choices simple, relying on local favorites heavily but noting that the process involves “a little bit of trial and error.”

“I like to start out with a shad color… and I’ll move from there,” he explained. “Go with three or four colors. Don’t go with seven or eight colors.” Reds and chartreuses all get playing time, and he tries to relate to local forage as much as possible.

While most of todays’ crankbaits come with sticky sharp hooks fresh out of the package, Digh nevertheless often replaces them, usually with larger models. As long as they don’t hook each other on the retrieve, that allows him to land more of the fish that bite.

While he’s often looking to extract fish out of heavy cover, Digh keeps his line relatively light. “I typically fish it on 10- to 12-pound line,” he said. “I don’t fish it on anything over 12.” Line size affects depth, as does the length of his cast and his rod angle. He prefers lower gear ratio reels, dropping down to 5:1 if it’s really cold (and he recommends that speed if you tend to fish too fast), but most often going with something in the 6.3:1 or 6.5:1 range. If you go much faster, “they don’t have time to eat it.”

His rod of choice is a Cashion M84369. The 6’9” length provides the best of both worlds, maximizing both distance and accuracy. He finds that rods over 7 feet make it harder to get his lures into tight places, and the rod has sufficient flexibility to allow bass to inhale the bait. “If you get a rod that’s too stiff, you’ll lose a lot of fish on it.”

If you want to get more insight into Digh’s cranking secrets, including how he uses a simple egg sinker to free snagged lures, check out his video filmed on the water, available only by subscribing to The Bass University TV.