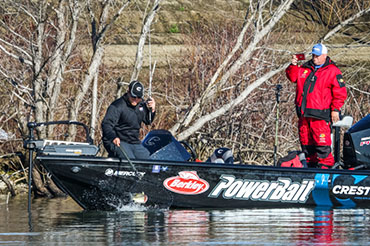 “It’s not often that I am able to fish a tournament where I make the same cast the whole time, but that’s exactly what is happening this week,” said Cox, who is competing in his 10th season at FLW’s top level. “It’s almost painful. I’ve tried to fan cast around in the same area, but nothing else works. I have to make the exact same cast, every time.”

Cox caught his fish Friday from the same place that he did on Thursday, an area that he described as a spot with “a little bit of sand and rock with patches of hydrilla all around it.” He said it was right at the mouth of a creek, and he thinks fish are moving into the back of the creek to prepare for the spawn.

“They’re just coming through there and they stop and rest for a few seconds to get some sun – it’s real shallow, only three feet – they sit there for a little bit and then go to the back.”

Cox said that his fish bit in the morning Friday – he didn’t catch a keeper after 11 a.m. He caught all of his fish on the same bait as Thursday – a Berkley Frittside 5 crankbait.

“I think tomorrow I might make fewer casts. It seems like every time I take a little break and re-tie or whatever and let it settle, then I make another cast and seem to get one. Tomorrow I’m just planning to sit there as long as I can. It might fall apart, or I might get there and make 10 casts and decide I can’t do this anymore. I’m just fortunate to be in this position heading into the final two days.”

Here are the totals for the top 10: