Cox the early leader at Rayburn 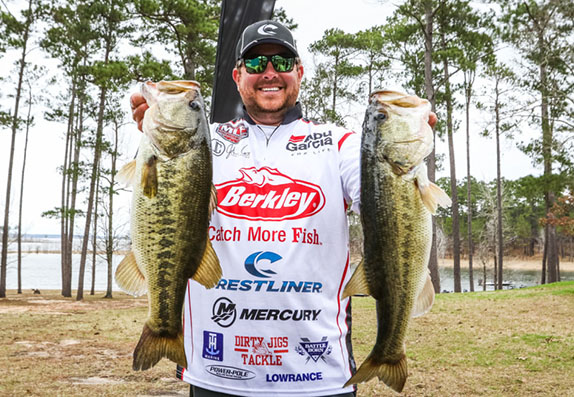 John Cox weighed a 21-07 stringer to grab the early lead at the Sam Rayburn Reservoir FLW Pro Circuit. He has a three-ounce lead over Greg Bohannan, who boxed 21-04.

“My morning was pretty slow, but it turned out to be a really awesome day,” said Cox, who has more than $1.3 million in career earnings with FLW. “I didn’t have anything special – only 10 or 11 pounds – until almost noon. I was getting a little down, so I just started whipping my crankbait out into open water. I caught one off of a bush and that’s what slowed me down. Then I found a little area that had them.”

Cox said he culled out his entire limit and weighed in five keepers all from that one area. He said his key bait was a Berkley Frittside 5 crankbait.

“They weren’t crazy-stacked up, but they all came on the same kind of throw,” Cox said. “You knew when you were around them because you could feel the bait coming over the fish – it felt like reeling over logs. Then all of a sudden one would eat it.

“What’s crazy is that I caught them flipping there in 2010,” Cox continued. “It was a fall tournament. I had nothing, then went up there and found some hydrilla mats and ended up flipping like 18 pounds. Now I’m just throwing the crankbait in the same spot.”

Cox believed that the fish he caught today were not resident fish.

“I’m pretty sure it was a transition area – they were either coming or going, but they were just passing through there for some reason. They might not be there tomorrow, but I hope that I can still find them. I’m just going to try to milk it for all it's worth.”

Here's how the initial top 10 stacks up: