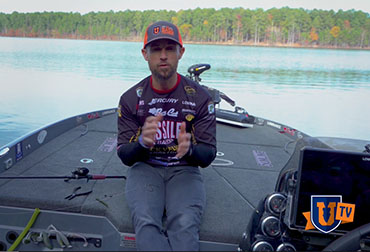 During a money finish on Lake Cayuga last year, Virginia pro John Crews found that if he located hard spots in the grass he could catch multiple fish from each of them on soft plastics – but with a Texas Rig or a dropshot he had trouble getting numbers of strikes or feeling the bottom. The solution was a Tokyo Rig, which provided the same undulating appearance as a dropshot, but with enhanced sensitivity. Moreover, when the fish bit, he could use 18-pound Sunline fluorocarbon to winch them out of the heavy cover.

Anglers across the U.S. and Canada are now aware of this technique imported from Japan, but the specifics, the “hows” and the “whys” remain, something of a mystery to many of them.

Crews learned about the VMC model of the Tokyo Rig from former traveling partner Mike Iaconelli and he believes it’s a solid choice, with an EWG hook in place and swivels top and bottom. Those swivels preclude line twist while providing a lot of pivot points for natural action. They arrive without weights so that you can customize your choices.

“The best way to do it is to put two weights on there so that they clack together,” he explained. “As it comes over pieces of cover, those weights are going to separate and then they’re going to clack back together.” Once they’re threaded on the wire, you bend the end a bit to hold them in place, but it doesn’t matter which direction you bend them.

While creature baits are a popular choice, Crews notes that in Japan the most frequently-used option tends to be “larger worms that have some substantial mass to them.” In particular, he wants some length after the hook to maximize action. One of his favorites is the Missile Baits Quiver Worm 6.5.

One nice thing about adding this technique to your arsenal is that you probably already have an adequate rod and reel combination ready to go. Crews recommends a 7- to 7 1/2-foot medium-heavy rod, possibly the same one that you use for Texas Rigs or football jigs, likely spooled up with 14- to 20-pound fluorocarbon. He likes a Cashion Worming Rod (7’2”) because it excels at making solid hooksets at a distance, but is also very capable of pinpoint short-range pitches. He pairs it with a reel no slower than 7:1, and often an 8:1. “I want to be able to reel in that bait as quick as possible so I can get it back out there into the strike zone so that I can get bit again.”

This technique works in all sorts of cover, including grass, but it’s at its best in places where you might be inclined to use a dropshot but want something that lends itself better to heavier tackle. This technique will allow you to apply pressure on big fish and then flip them into the boat without fear.

If you want to get more insight into how Crews utilizes the Tokyo Rig, check out his video filmed on the water, available only by subscribing to The Bass University TV.