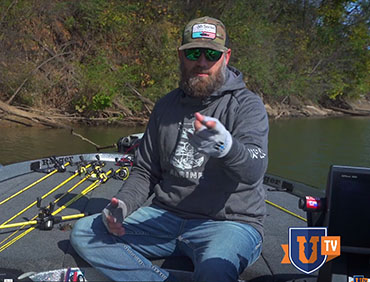 When in doubt about where to fish, Luke Dunkin will often default to a bluff bank, no matter the time of year.

“I am a firm believer that bluff banks hold fish year round,” the Tennessee pro said. “They have everything they need in a bluff ... it’s really an ecosystem.”

While they may look entirely vertical from above the surface of the water, many bluffs have irregular features or cover upon them. There might be a stairstep, a rockpile or some trees that have washed up against the bank. Those irregularities determine what Dunkin throws, as does the time of year, but a jig is often his starting point.

It might be a 3/16-ounce finesse jig, which gets bites under tough conditions, all the way up to a 1/2-ounce model, but he’ll cycle through different sizes until he finds the right profile and rate of fall. No matter what size he’s throwing, he keeps his tackle simple – a 7’2” heavy-action rod paired with a 7.3:1 baitcasting reel. Most of the time he’ll utilize 16-pound Sunline Shooter fluorocarbon, but around heavy cover or with a bigger jig he’ll sometimes upgrade to 20.

He also likes to crank, especially on those bluffs that offer a small shelf running parallel to the main structure. Early in the year, he’ll rely on tight-wobbling balsa cranks, but most of the time a 6th Sense C6 or C10 gets the call. He’ll line up his boat right next to the wall and pull his lure parallel to tempt tight-holding bass. “Magic happens when they get like that,” he said. His key tools are a 7’ rod with a parabolic action and 12-pound fluorocarbon.

Whenever the bite is really tough, or there’s heavy pressure, he always makes sure to have a shaky-head on the deck. “It’s just a fish-catcher,” he explained. A 7’2” medium-heavy spinning rod gets the call (“Don’t be afraid of the spinning rod,” he cautions) and he’ll use 10-pound braid with a 7-pound fluorocarbon leader. Why 7? Because Aaron Martens recommended it.

One old-school bluff technique that’s underutilized is a big spinnerbait, usually 5/8-ounce up to a full ounce. “I am a big proponent of yo-yo’ing them,” he said. He always adds a trailer hook (it’s especially important when smallmouths and spotted bass are around) as well as some sort of soft plastic trailer. Usually that means a Zoom Split Tail, but in dirty water a chartreuse or white Zoom Fat Albert Grub gets the call because it pushes more water.

“Chartreuse and white is hard to beat,” he said of his spinnerbait choices, but in clearer water he’ll turn to something like blue glitter or sexy shad, and in dirty water a chartreuse and blue model gets the call. A good follow-up for the spinnerbait is a swimbait like a Zoom Swimmer, which he pairs with a 6th Sense Divine swimbait head. It’s “high risk, high reward,” he explained, noting that you may get aggravated by snagged jigheads, but the payoff is often some bigger-than-average fish. He uses a 6.3:1 gear ratio reel for this technique because he has a “tendency to wind it too fast.”

If you want to get more insight into the different techniques that pay off for Dunkin on bluff banks, including when he fishes a fluke and how he decides which model and color to throw, check out his video, filmed on the water, available only by subscribing to The Bass University TV.