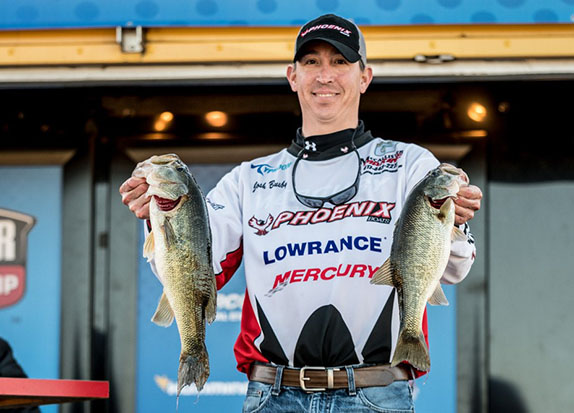 Josh Busby of Rogersville, Mo. claimed the final berth in the 2020 Bassmaster Classic on Saturday by winning the Team Championship Classic Fish-Off at Lake Hartwell in South Carolina.

Busby, a 36-year-old food scientist who competes on the Ozark Mountain Team Trail, caught a 16-05 stringer (the heaviest of the two-day Fish-Off) to bump his total to 26-12. He finished 6 ounces in front of runner-up Brock Reinkemeyer.

“Honestly, I don’t think this has sunk in yet,” Busby said. "I told my marshal I don’t think my hands, my arms, can cast anymore because I’ve thrown so many casts the last few days. Fishing has been such a big part of my life. I might have to have (Ozark Mountain fishing partner Timothy Taylor) drive us home.”

Busby teamed with Taylor to place 3rd in the team portion of the tournament that ended Thursday, and that showing got them into the Fish-Off. The six anglers from the top 3 tandems had their weights zeroed, and they fished individually for two more days with a berth in the Classic on the line.

Busby said Thursday he wasn’t sure he had located the bites needed to win the Fish-Off, but he’s never been happier to be wrong.

Sunshine and wind were key to his offshore bite, and Friday’s steady rain and cold didn’t help his cause.

Busby struggled to scratch together a 10-05 limit and was in 2nd place under less-than-ideal conditions after Friday. Then Saturday’s clear skies and brisk breeze reassured him he might be able to piece together a winning bag after all.

He caught a limit by 8:30 a.m. and upgraded several times later in the morning.

“Probably the deepest I had the boat was maybe 40 feet,” he said. “The fish were setting up on the first or second ledge. If you fired out across the points, somewhere in that 18 to 24 feet (depth range), you could make them come up an react to the bait. I don’t think I missed one windy point or secondary point from the dam all the way back up (to Green Point Landing.) It might have been 75 or 80 points I fished.”

Busby used Wiggle Wart and Rock Crawler crankbaits to entice his best bites for the week. He opted for a variety of colors, but shad, phantom green and watermelon with chartreuse belly were most attractive to Hartwell’s bass, he said.

Reinkemeyer paired with Joe Bass teammate and fellow Missouri resident Brad Jelinek to win the team title on Thursday, and the duo split a $20,000 Nitro/Mercury cash prize for that win.

In all, 165 teams from 30 states and two foreign countries competed in the team portion of the tournament Wednesday and Thursday. The Top 33 teams in the original field split a cash purse that totaled $87,000, including the $20,000 won by Reinkemeyer and Jelinek.