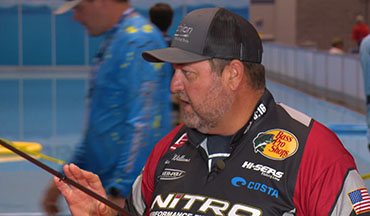 As his career as a professional angler has progressed, North Carolina pro David Williams has improved his results by decreasing the number of rods that he uses. That may sound counter-intuitive in an era of hyper-specialized sticks, but he believes that simplicity has made him a better competitor.

Earlier in his career, when he got outside of his comfort zone – for example on clear-water northern smallmouth fisheries – he’d try to follow the pack, but when he tried to do it “their way” the result was poor finishes. Now, when he goes to a body of water like the St. Lawrence River, he’ll fish his way. The first bites he looks for are those distinctly within his wheelhouse, flipping a jig on docks or rolling a swimbait over the grass. That’s enabled him to keep his rod choices simple.

“I think we’ve made it way too complicated,” he said, explaining that while there are a few notable exceptions to the rule, the vast majority of his casts are made with three different rods. “All of my baitcasting rods are 7 feet long, every one of them. I like them all the same length.”

He uses Cashion Rods, and the first one he goes to is the M8447, a 7’ heavy-action rod, which he employs for “all my jig fishing,” heavy topwaters like the Whopper Plopper or big Spooks, and some bladed jigs and spinnerbaits. If you’re surprised that he’d use a heavy rod for topwaters with trebles, he explained that it’s often necessary to drive big hooks home. “Most of the time when I’m topwater fishing I’m making really long casts,” he said.

The second rod is “not much different.” It’s the M8437, a medium-heavy version which is hardly distinguishable from the first one except that it has “a little more tip on it.” He uses that whenever he needs accuracy in casting moving baits like lipless cranks, most spinnerbaits and most crankbaits. It also gets the call for light jig fishing.

The third rod in the heavy rotation is the C8457, a moderate-fast 7-footer that excels for shallow cranking, lighter topwaters like poppers, and jerkbaits. “All that stuff, you need a lot more flex in your rod,” he said.

He’s working on reducing the lures that he carries, too. Bass from coast to coast feed heavily on shad, crawfish or bream, so carrying a hundred different “just in case” colors – except when clearly applicable – can be more of a hindrance than a help.

“We get way too complicated on this,” he concluded.

The way to really improve your fishing? “Quit chasing everyone else.”

If you want to learn some of the other secrets to the FLW winner and five-time All-American qualifier’s solutions for simplifying his tackle, check out his full video, filmed at ICAST, available only by subscribing to The Bass University TV.