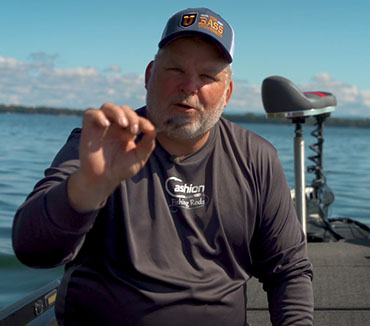 The Storm Wiggle Wart may be known as an Ozarks-region mainstay and bass magnet, but Bass University founder Pete Gluszek has long used one from coast to coast, throughout the seasons.

“This bait's been around a long time,” he said. “A lot longer than I’ve been fishing.” He especially likes it on multi-species lakes – those with some combination of largemouths, smallmouths and spots. “You want a bait that can really get all of those bass to trigger.”

While some newer crankbaits may be sexier, the Wiggle Wart produces year after year after year because of its universally attractive qualities: It dives to 6 to 8 feet, depending on line size; it has rattles; it has a slightly wider wobble than the also-deadly Rapala DT6; and it deflects off of rock and wood.

Gluszek possesses dozens of colors of Warts, but three main patterns do most of his damage. Any time the fish are feeding primarily on crawfish, he likes reds and browns, regardless of the season. When fishing for smallmouths, regardless of whether it’s sunny or cloudy, he’ll often employ “bright, vibrant colors,” often with chartreuse. “I like to fish it higher up in the water column,” he said, noting that those gaudy shades will pull fish up out of 15 or 20 feet of water. The third main pattern is a shad imitation, which he’ll use whenever the bass are keyed in on baitfish. “I like to keep it really, really simple.”

He fishes the Warts on a John Crews signature series cranking rod from Cashion. Even though it’s not a particularly deep diver, he’ll often use the 7’11” model. That enables him to make long casts, get the lure down to its maximum depth, and keep it there. It also means that when he hooks a fish at a long distance, he can keep pressure on it during the fight. When fishing close targets he may go to a slightly shorter rod, but still within the same series. He’ll pair them with a 7:1 or even an 8:1 baitcasting reel spooled with 10- to 14-pound Gamma Edge fluorocarbon “depending on what I want to do with the bait.” If he’s around zebra mussels or other heavy cover, he errs toward the heavier extreme, but when it’s critical to maximize depth or vibration he’ll use 10 whenever possible.

“Hooks are really your direct connection with the fish,” he explained. While some crankers like to upsize their treble hooks whenever possible, Gluszek sticks with a standard wire diameter No. 6 EWG-style hook almost all of the time. They provide great hook penetration and surprisingly strong holding power. However, at the first sign of fatigue or wear he swaps out the suspect hook for a fresh one, not wanting an easy fix to be the difference between success and heartbreak.

If you want to learn some of the other ways in which Gluszek has used the Wiggle Wart to his advantage, along with some of the “crazy” colors he’s used to trigger reluctant bass to bite, check out his full video, available only by subscribing to The Bass University TV.