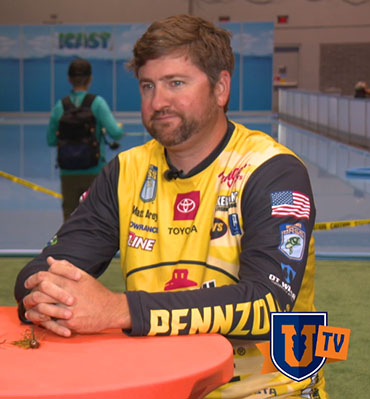 If you saw Matt Arey fishing a jig during his 3rd-place finish in the Elite Series event on Lake Guntersville this year, you might have been shocked. He wasn’t dragging it, crawling it or otherwise slowing things down. He was ripping it off the bottom using a technique called “stroking” that triggers neutral fish to bite. It’s popular throughout the Tennessee River chain of lakes, mostly on Kentucky Lake, and the North Carolina pro learned it from a longtime friend from the region.

While increased pressure has led many anglers to downsize on the TVA impoundments, utilizing dropshots, Neko Rigs and the like, Arey believes this power technique is every bit as effective, and tends to catch bigger-than-average fish.

“I can activate schools of highly-pressured fish with this jig right where when I see them on my DownScan and I see them wadded up tight in little groups," he said. "I can jerk that sucker. It falls in front of his face. It’s just a reaction.”

The No. 1 mistake he sees among novices to the technique is that they stroke the jig on a tight line. “Every time I go to hop that jig up I always make sure there’s 7 to 15 feet of slack line on the water,” he said. You can catch bass the other way, but he said you’ll get “three times more bites” with the slack-line pull. You can tell you’re doing it right when you consistently hear the "whoosh" sound of the line coming up quickly off the water. The key is to get the first fish to bite – that usually fires up the school. “It’s on after that.”

He prefers P-Line Tactical Fluorocarbon, never less than 17-pound, spooled on a high-speed Lew’s Reel, usually at least 8:1. That enables him to catch up with bass that grab the jig on a slack line and run toward him. He’ll typically put it on a heavy-action 7’6” Lew’s Custom Lite rod, although in shallower water where he might not need quite as much leverage he’ll go down to a 7’4” heavy.

In choosing his jigs, he keeps the sizes simple – either 1/2- or 3/4-ounce. “I like a quick fall and a lot of action,” he said. A variety of crawfish-themed trailers help him achieve the action part of that equation, but he’s careful not to overburden the lighter jig with something too bulky when the bass want a quicker fall. He’ll often have several different combinations on deck to make sure that he dials in the proper one for that particular day. He’s also a huge fan of old-school living rubber skirts, which create a big profile and often grab the attention of the biggest bass in a particular school.

If you want to learn some of the other ways in which Arey makes his jig-stroking technique successful, including some of the specific trailers that he affixes to the back of his football jigs, check out his full video, available only by subscribing to The Bass University TV.