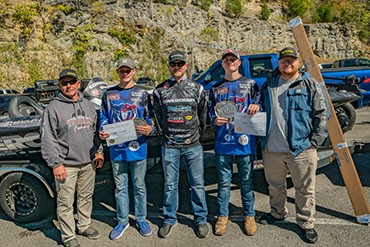 High school fishing is a big deal in Kentucky – 200 teams converging on Lake Cumberland to compete in the recent 7th annual Bradley Roy High School Open is proof of that.

The field consisted of 177 high school teams and 23 junior teams (6th through 8th grade), making it the largest high school event on record in Kentucky.

The event was moved from Herrington Lake to the more spacious Cumberland this year. The tournament is an officially-sanctioned high school event by the Kentucky B.A.S.S. Nation and kicked off the 2019-20 season for many of the teams. The Kentucky Department of Fish and Wildlife Resources provided a release truck and allowed for a special, one-day size limit waiver so 12-inch smallmouth, largemouth, and spotted bass could be weighed-in.

Immediately following the weigh-in was when a twist came and really ramped up the intensity. Roy gathered the top 5 teams and immediately cut off any information gathering from other teams in the event. He then began preparing all teams for a fish-off on Sunday.

The remaining teams were housed at the Lake Cumberland State Park Lodge and prepped for a Major League Fishing-style tournament the next day. Each team was assigned boat officials trained by Roy who utilized manual score sheets and MLF-supplied scales. Roy convened the group at the boat ramp on Sunday morning and provided a map of the boundary lines.

Teams were given 30 minutes to scout the fishable water and “lines” began at 7 a.m. Scoretracker Live was setup by MLF and fans followed the scoring. Roy streamed commentary on his Facebook page as he covered the morning action. The teams fished two 2 1/2-hour sessions with a 15-minute break in between.

True to MLF form, the winner was decided in the final minutes of action. After all five boat officials had reported in, the team of Will Carnes and Jason Denney were crowned the champions on the water. They held off the Estill County team of Micah Adams and Chase Rawlins by just 2 ounces.

“There are so many aspects of this event that stand out in my mind; the number of boats, the quality of anglers, the new venue at Lake Cumberland, the addition of the catch, weigh, release day on Sunday, but the one that stands out the most is the addition of college scholarships," said Roy. "Winning these Campbellsville University scholarships is a life-changing event for the winning team. The investment these sponsors made in providing scholarships for all of the top teams is a huge deal and I am so excited to look back in a few years and see how it helped these student anglers."