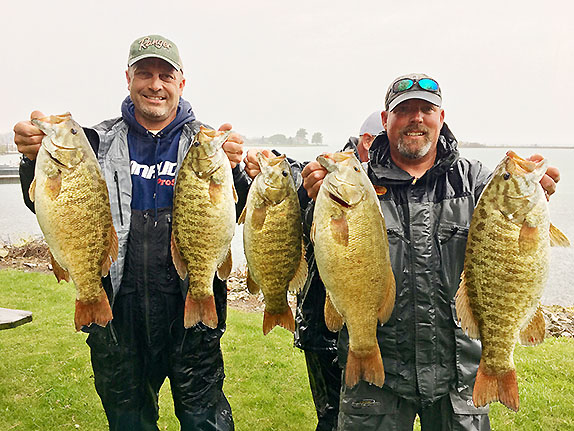 Former tour pros Scott Dobson and Kyle Greene weighed a 30.31-pound stringer of smallmouths on Saturday to win the Cash For Bass Monster Quest event at Michigan's Lake St. Clair. It's the first tournament sack of 30-plus pounds known to have come from the lake.

"It was a phenomenal day – we finally pieced it together after 8 years of trying," Dobson said. "We didn't expect it to happen on Saturday with the weather conditions; it was cloudy all day with a pestering rain that went from misting to heavy and back and forth with everything in between."

The sack included two fish in the 6 1/2-pound class and another around 6-even, along with a pair of 5 3/4s. They came from relatively shallow water (an average depth of 15 feet) and bit tubes, swimbaits and bottom-bouncing blade baits.

Of the 38 bronzebacks they caught on the day, 15 were in excess of 5 pounds.

"We were talking after the day and we figured we threw back two 28-pound bags," Dobson said. "We had it dialed in – we fished bays and some current-related places and ended up going to seven areas, some of them twice."

According to Dobson's onboard Cul-M-Rite scale, the duo reached the 30-pound mark at about 10:30 a.m. They made one more cull with the biggest fish of the day – a 6-10 bruiser.

"Kyle was doing the livewell work and at one point he told me we couldn't use a fish that was a high 5. I asked him if we were at 30, and he said, 'Yep.' I told him it wasn't enough because the Cul-M-Rite weighs a little high. That last one sealed the deal."

The heaviest competitive sack that Dobson and Greene had previously caught at St. Clair was 29.68 in 2010.

"We typically do well in this tournament, but we knew we had to crack that elusive 30 barrier soon because some buddies of ours (John Robiedek and Jim Clauser) came close last year. They fish similar patterns and they also have a lot of experience on the lake."