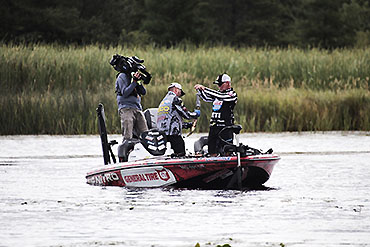 Only seven fish were caught before 10 a.m. during the second of three elimination rounds at the Major League Fishing Summit Cup at Michigan's Lake Hubbard, but the remainder of the day saw 60 come aboard the boats of the nine competing anglers. The competitor who led the way with a nine-fish, 29-07 haul did all of his damage between 12:42 and 3:36 p.m. His biggest fish was a 5-09 smallmouth.

The No. 4 qualifier caught a day-best 14 fish, but they averaged just 1-06. The last-place guy averaged better than 4 pounds per fish, but he only caught two.

Elimination-round competition concludes Wednesday, with sudden-death set for Thursday and Friday. The championship round, which will consist of eight anglers, will take place Saturday.