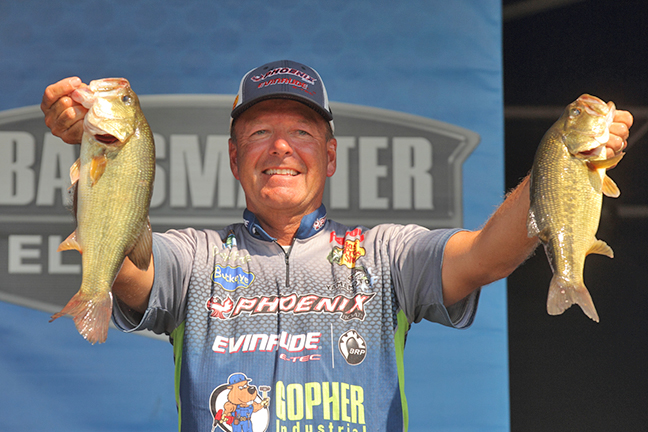 Davy Hite, one of five anglers to have won both the Bassmaster Classic and Forrest Wood Cup, will not compete on the Bassmaster Elite Series in 2017, B.A.S.S. announced today.

Instead, Hite, a two-time B.A.S.S. Angler of the Year, will transition to the role of color commentator for the web-based Bassmaster LIVE as well as The Bassmasters television show.

Hite endured a tough 2016 season, falling out of contention for the 2017 Classic and this year's AOY championship down the stretch. After the season, he revealed to BassFan that he'd had a lot on his mind with his oldest son's looming deployment overseas and health issues involving his mother-in-law and father-in-law.

“To be honest, I haven’t thought about it with everything going on with my family,” Hite said when asked about his plans for next year. “When I get home from a tournament, I tend to forget about fishing for a while.”

Below is the press release issued by B.A.S.S. detailing Hite's announcement:

BIRMINGHAM, Ala. — Davy Hite, the 1999 Bassmaster Classic champion and two-time Toyota Bassmaster Angler of the Year, won’t be competing on the Elite Series in 2017, but his fans will be seeing him more than ever. Hite has accepted a position as color commentator for “Bassmaster LIVE,” “The Bassmasters” television show on ESPN2 and all other B.A.S.S. programming, the company announced today.

“I view this more as a transition, rather than a retirement,” Hite said. “In a perfect world, I wish I could keep competing for a few more years. But this was a golden opportunity that I couldn’t pass up.

“This is a way for me to continue to have a positive impact and stay involved with the sport of bass fishing, which has meant everything to me.”

Hite, 51, has won more than $2 million in his 23-year career, which includes a Forrest Wood Cup title in 1998, in addition to the ’99 Classic crown and Angler of the Year titles in 1997 and 2002. His B.A.S.S. career includes eight first-place finishes, 14 Bassmaster Classic appearances, and 45 Top 10 finishes. The Ninety Six, S.C., resident has finished in the money 140 times in 254 total tournaments.

“At the age of 27, I quit a full-time job to become a tournament bass fisherman, which had been my dream since I was 12 years old,” Hite said. “It was a leap of faith. Some of my friends thought I was crazy. This is different, but at the same time it’s a leap of faith, as well.”

Jerry McKinnis, one of B.A.S.S.’s principal owners, as well as a pioneer in outdoor television programming, is pleased to have Hite as a full-time addition to the B.A.S.S. team.

“I’ve known for a long time that Davy would be a great on-air talent,” said McKinnis, who praised Hite’s work on the “First Look” segments of Bassmaster.com tournament coverage. “I realized very quickly how comfortable Davy was in doing this. He’s good at asking the right questions. But it’s not an interview with him, it’s more like a conversation, and that’s important.”

Over the past three years, Hite has worked increasingly with the “Bassmaster LIVE” hosts Tommy Sanders and Mark Zona and Elite Series emcee Dave Mercer.

“I’ve enjoyed working with all the folks at B.A.S.S., both on-camera and behind-the-scenes,” Hite said. “But I never had a clue it could turn into something like this. Again, this was too good an opportunity to pass up.

“I think I’m still competitive enough to win the first tournament on the Elite Series next year. But at the same time, I knew in my heart that I didn’t want to fish another 20 years.

“You never know if you’ll get a second chance to make a transition like this one, and stay involved in the sport you love. It was reassuring when I presented this to my sponsors, and they all agreed with my decision.”

Hite finished 56th in the final 2016 Toyota Bassmaster Angler of the Year standings. He’s had at least one Top 10 finish in each of the last three Elite Series seasons.

“We’re really excited about Davy Hite joining our team,” said Mike McKinnis, vice president of media communications for JM Associates, which produces B.A.S.S. television and Internet content. “He brings some inside knowledge to the broadcast. He knows what the pros are doing and why they’re doing it, which is really important in our ‘Bassmaster LIVE’ coverage.”

Tommy Sanders echoed those thoughts, saying, “Davy has got one-of-a-kind perspective on tournament bass fishing. Just as importantly, he’s got a great ability to discern when what seems to be a small story is just as important as a big one. Plus, I just like the guy.”

Hite’s first appearance under the new arrangement will be at the Bassmaster Elite at Cherokee Lake, Tennessee, Feb. 9-12, 2017, and he’ll be an integral part of the programming for the GEICO Bassmaster Classic presented by GoPro in Houston March 24-26.