Lane had similar incident to Menendez on day 2 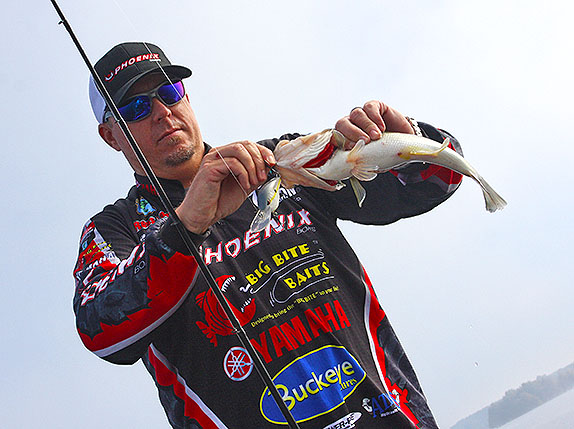 Mark Menendez’s encounter with an angry landowner during the St. Lawrence River Elite Series that resulted in Menendez filing a formal complaint with the state DEC wasn’t the only episode where an Elite Series pro was targeted for no apparent reason.

Russ Lane said he was sworn at and had a man in an aluminum multi-species boat drive circles around him and on the area he was fishing during the morning of day 2 at the St. Lawrence River.

After having a stellar day 1 on which he caught 20-12 and was tied for 7th, Lane returned to the same key spot to start day 2. The spot he was fishing featured some deep water adjacent to a sand bar that topped off in 3 feet of water. Lane said many of the fish were right off the side of the bar, but he was hoping there’d be some on top in shallow water early in the morning.

“I stopped the boat about 50 or 60 yards up current from the spot,” Lane said. “That gave me time to unstrap my rods and let the current take me down to the sweet spot. I put my trolling motor down and the sun’s in my face and out of the sun pops this boat barreling right toward me.

“He turns right into the area where it’s 3 feet and does a hook slide and stops. It was like he was trying to race me to that spot and he was upset that he didn’t beat me there.”

Lane said he threw his hands up in the air and said, “What in the world are you doing,” but he doesn’t think the man heard him.

“He immediately jumps up and starts cussing and screaming and hollering at me,” Lane said. “He started telling me how he has a real job and he can fish wherever he wants. Then he puts his engine in gear and does a half circle and blows mud everywhere and goes behind me.

“I asked him why he just did that and he started swearing at me and telling me that I don’t work for a living. I still have no clue what I did to set that guy off.”

Lane said he recognized the man and boat from day 1. Lane recalled catching a bunch of fish on that spot in a short period of time and the man was behind him most of the time.

“He’d drift by and crank up and every time he’d do it, he’d get closer and closer,” Lane said. “I’d be reeling one in and the current would take me off line a bit and there were a couple times we were pretty close to each other. I just wanted some room to breathe.”

Lane said they never spoke to each other on day 1.

Lane said the day-2 encounter lasted a matter of a few minutes, but the man’s actions effectively rendered the area unfishable for a while. The man eventually left Lane alone and Lane watched as he motored up to the next point in the vicinity of what Lane believes was another Elite Series competitor.

It left Lane frustrated as these sorts of incidents are happening too frequently for his liking.

“His intentions, in my heart, were to beat me to that place and make life miserable for me,” Lane said. “I’m not going to sugar coat it. It’s the whole mentality that you have something I don’t and I deserve a piece of what you have. That’s the mentality I’ve just about had enough of. I am sick to death of it. That’s what it boils down to for me.

Lane said he wasn’t aware of the angler harassment laws that New York has in place until he heard about Menendez’s situation. Lane said he nor his marshal took a picture or video of the man or the boat.

“My priority, in the moment, was getting a bite and that was my 100 percent focus,” he said. “I just wanted him to move on. I didn’t care about pictures. I just wanted to get a bite.

“I want people to know. I’m not blaming him for having a bad day. I have no excuse for not catching five that day. That’s on me.”

Lane thinks one thing B.A.S.S. and FLW can do in the future is if there is hard evidence that someone has harassed a tournament competitor, those people should be banned from any tournaments held by the organizations and a recommendation be sent to the local circuits to follow suit.

“That might be a deterrent if it happens enough,” he said. “I know one thing: My GoPro will be on every day that I’m on the water from now on because now, I have to be looking over my shoulder all the time.”