In general terms, this was just the most incredible week. Everybody in the Top 10 throwing one bait all day on the final day is just unheard of, and on top of that, it's a new bait that the fish had never seen before. Guys started figuring out how to use it over the last couple of days and I think it's a great thing for bass fishing. It shows what the power of innovation can do.

This lake is so loaded with fish, but they've gotten a great education because of all the pressure. Then a new, innovative bait like the Alabama Rig comes along and knocks their lights out. It was really fun to be a part of and it's something bass fishermen will be talking about for the next decade, at least.

I was thrilled to see Paul Elias win this event. He's a great guy and I think the world of him and he's just an icon in the sport. He was one of the first guys who believed in the bait and he deserved to win. It took him catching more than 50 pounds over the first 2 days for me to wake up and tie one on.

The fishing today was great. I caught about 25 keepers with the Berkley Hollow Bellies in gizzard shad and blueback herring on there, but I just didn't get any real big ones. It was a fun week and I was glad to be a part of the Alabama Rig's debut on the national tournament scene.

I didn't do much on the last practice day – I did catch one better fish, but I didn't even have a limit. It's tough. A lot of guys think maybe 8 pounds a day will make the money. I don't think it's quite that bad.

Somebody was saying that David Fritts was catching them good, like 18 to 20 pounds a day. The fall's when he's really dominated over the years and October more than any other month. It really wouldn't surprise anybody to see him blow this one out.

It's just a grind and I'll be pretty happy if I can catch a limit tomorrow. 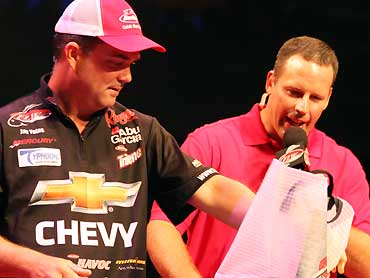 Guntersville isn't fishing like its old self – it's super-tough this week. The fish are still there, but they're just not biting and it's got guys a little bit confused about what to do. The lake's in beautiful condition – it's got more grass than I've ever seen and you know there's tons of big fish in there, but they're hard to find.

I've fished shallow and deep and everywhere in between. You can catch fish any way you want to, but it's hard to pattern the big ones. There's always a premium on the big bite here and I haven't found anything that's consistent or reliable. You'll see a few big stringers, but I think people are going to be surprised by how light the weights are for this tournament.

I don't mind a tournament like this at all when the bite's a little bit tough – I think it might be easier when you need just one big one a day instead of a limit of them.