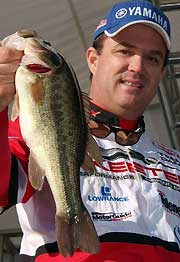 I saw that 22 pounds won a six-fish-limit team tournament here on Saturday. That's phenomenal for this lake. But as far as I can tell, it's the same old Beaver Lake. It'll probably take 23 or 24 pounds to make the Top 10 cut. That's what it always takes.

There's a lot of fish biting, but it's May, so there's a lot of different patterns working, and lots of ways to catch 9 or 10 pounds. Like always, getting those kicker bites is the key. There'll be a lot of limits caught, but it's more about whoever can find those big largemouths and smallmouths.

I think big smallmouths could play a role in this thing. I haven't been fishing for smallies, but from what I've heard, they've become more and more of a factor at Beaver. Most of the guys are fishing down by the dam trying to get on the smallies and largemouths. It's interesting that one-third of the lake is getting three-quarters of the fishing pressure. I only saw three boats in the river yesterday.

I think a guy's just got to fish whatever he has the most confidence in to get the quality bites. When it all settles out, the Top 10 guys will probably be fishing several different ways – topwaters, swimbaits, jigs, worms. It's just a grab-bag. But that's how most lakes fish in May.